The wood was ordered and delivered in three loads. Each load’s dollar amount met the minimum requirement for the delivery to be free. This kept the yard stock quantities down while I primed and painted the boards.

These Saddle Brackets were designed by me and manufactured at a local metal works shop. I primed the mild steel with two coats of phosphoric acid and two coats of red primer. I then applied two coats of copper metallic paint.

I hate to paint above my head, OUCH! So I spent the summer priming and painting all the lumber.

Three concrete footings were installed. Mixing concrete by hand with a hoe in a wheelbarrow is a real pain.

I raised the three posts and plumbed them upright. Using the Theodolite, I determined level measurements across all three. I trimmed each post and re-installed.

I built a scaffold for raising the front header beams. This way I could lift them up in small stages by myself.

As I placed the front header beams I installed one rafter to stabilize the structure. 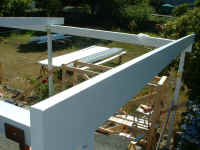 These pictures show raising and installing the 15 rafters. See the blue rubber sheet tied on the rafter on the second picture? I used this as a second set of hands throughout the construction effort.

I tied the sub-facia with string to the two 14’ 4x4’s and pulled the assembly up from behind with rope. This brought the board up to where I could pull them into place a screw them in.

All the ¾” plywood was primed and painted. I lifted each sheet up and cut to fit. I primed and painted the cut ends and then screwed them into place. Each sheet required between 80 to 96 screws depending on the panel’s location. The edges were screwed at 4” and the body at 6” into the 1’ OC rafters. This may sound like overkill but the porch is one big open surface that will act like a wing. I do not want this wing to lift off in the next big wind storm and go flying.

These pictures show the final surface application of PVC roofing material and the flashing. I hired a contractor to do this.

This is it. Done!