The Damper Release Bar (Figure 2-1, 22) provides a foot-activated mechanical means of disengaging all Dampers allowing all Tines to vibrate freely.

The Damper Push Rod Assembly (Figure 2-1, 33) is a short length of wooden dowel capped on each end with felt and held in place by a sleeve built into the back structure of the Piano housing. Forced upward by the thrust of the Sustain Rod, it, in turn, pushes upward on the back surface of the Damper Release Bar causing its leading edge to bear downward on all of the Dampers thus disengaging them from the Tines. With the Dampers thus released, all Tines are now free to vibrate sympathetically with the struck tones as is the case with an acoustic piano. The difference becomes apparent when a comparison is made between the resultant sound of a chord where only those Dampers involved with a particular chord are released and then the sound of the same chord when all Dampers are released.

The Damper Arms are now provided in fixed multiples of twelve known as Damper Modules (Figure 2-1, 17). This change was made to preclude the possibility of side shift in shipping and is the epitome of simplicity. It consists of tempered aluminum stamped into Modular configurations to accommodate the Damping requirements in Bass, Mid and Treble ranges (Figure 2-2).

The Bass Damper Module is shortest with full width Arms to provide the strength and tension needed to properly damp the long Tines in the Bass area. Progressing up the Keyboard to the Treble, the Tines become shorter and therefore the Damper Modules are designed to provide graduated strength and tension according to the need throughout the range of the Keyboard. In keeping with the various damping requirements, the Damper Felts as well are designed to accommodate the three areas - the Bass with long, wide Felts; the Middle with Felts of medium length and width; and the Treble which uses short, narrow Felts.

With the Damper Release Bar and the Damper Modules removed, the new Action Rail (Figure 2-1, 29) is revealed to be a sturdy, extremely accurate aluminum extrusion.

The new Harp Supports (Figure 2-3, 9) are fabricated from heavy aluminum extrusions sturdy enough to hold the assembly in place undamaged by a direct six-foot drop.

The Hammer Flange (Figure 2-3, 18) is molded in multiples of twelve. This also was redesigned in this manner to preclude the possibility of side shift in shipping.

It should be noted that the Multiple Flanges are molded of a hard A. B. S. material with a 15% teflon content, thus providing lifetime lubrication. 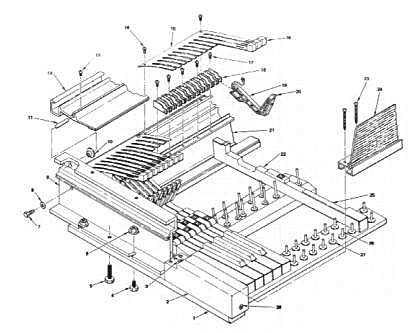