In the broad claim of our original patent, No.2,972,922, the Tone Source is described as a "tuning fork of unequal legs". In other words, we deviate from the traditional concept of a tuning fork in that, while both legs of the fork vibrate at the same frequency, the lower leg is more resilient and, as a consequence, responds more positively to the blow of a Hammer. It is to our advantage to construct this lower leg in such a way as to render it as resistant to wear and fatigue as possible. In pursuit of this, the Tone Bar Assembly has gone through three major changes through the years. 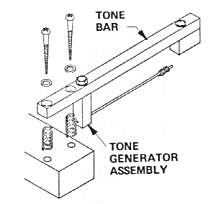 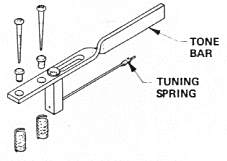 In our original design, the "Tine" (bottom leg of tbe tuning fork) consisted of a length of piano wire .075 (1.905mm) in diameter (Figure 7-4). Fine tuning was accomplished by means of a slideable length of coil Spring which was crimped to produce a friction fit.

Later, in an attempt to distribute the vibrational shock created by a heavy Hammer blow, the wire was tapered (Figure 7-5).

This taper was accomplished by the "centerless grinding process". This new configuration added considerable life expectancy to the Tine.

As a result of some six years of developmental procedure, a major breakthrough was accomplished in the processing of these new tapered Tines. Instead of the centerless grinding process, we introduced the current Tine (Figure 7-6). In this new innovation the Tine is formed by the swaging process, a process which by its very nature adds strength to the part by compacting the outer surface (skin) of the Tine.

While it is the nature of even the finest steel to deteriorate when shocked by stresses beyond its elastic limit and thus finally to crystalize and break, we feel that in this new process we now have reached the ultimate in providing a part capable of withstanding indefinitely all but the most withering treatment.