Generally speaking it can be said that the Piano will not "go out of tune". Certainly it does not go generally out of tune over the entire Keyboard as does the traditional string piano.

What may happen is that one or more notes may go out of tune because of a loose Tuning Spring or as a result of Tine fatigue under the stress of constant heavy blows. Under these conditions tuning simply requires pitch comparison with the tone an octave below and shifting of the Tuning Spring until pitch alignment is achieved. In the case of extreme Tine fatigue, the Tine should be replaced.

An extremely helpful feature is the easy removal of the Tone Generator Assembly (Tine portion) from the Tone Bar by unscrewing the Tone Generator Mounting Screw; thus, should a Tine become damaged for any reason, replacement will be easy and inexpensive. Replacement Tone Generator Assemblies are available in Kit form, with the Tine 4-3/8 inches (111.125 mm) in length. This length Tine will accommodate the "Heavy Traffic" area where the highest incidence of fatigue and breakage is likely to occur. These can be cut to desired length with a pair of side-cutters. For detailed removal and replacement procedures, refer to Chapter 6, Page 6-1.

On each Tine there is a crimped coil Spring so fitted that it can be moved by hand with some effort (Figure 5-1). By design it fits tightly enough to resist normal stresses. Ideally, it remains fixed firmly in place unless deliberately moved.

Theoretically and ideally, once set, the pitch remains unchanged until deliberately altered by purposed relocation of the Tuning Spring (counter-weight). Pitch control by this means is not as difficult a task as with a standard piano. The novice is invited to test his skill by taking the following steps. 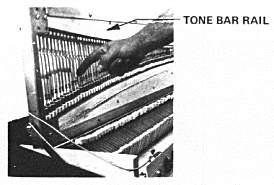 There are several brands of electronic tuning devices on the market. Most of these operate roughly on the principle of the strobe light. There is a spinning disk, the speed of which is accurately calibrated. A control knob allows for scale tone changes. Assuming you set the control dial at C, there is a microphone which "hears" the pitch of the Bar you are tuning. Its vibrations are interpreted as flashes of light. These in turn are superimposed on the spinning disk. If the two are in synchronization, the wheel will appear to be stopped. If the Tone Bar is high in pitch, the wheel will appear to rotate clockwise, etc. Moving the Tuning Spring downward will slow the speed of the Tine. This will cause the strobe wheel to slow its movement until finally, when your adjustment is correct, the wheel will stop, indicating that the Bar is "in tune".

The various electronic devices have another feature - some are more sophisticated than others. It is a deliberate and controllable means of calibrating the entire mechanism with reference to the 60 cycle signal coming from the electrical outlet. With calibration thus achieved and with the control dial set at Zero, the machine supposedly is now set at A440. This is a standard arbitrarily determined as an international standard and means merely that A above Middle C will vibrate at precisely 440 vibrations per second. Because of such a standard, it is possible to tune an instrument in California with reasonable assurance that it will be "in tune" with a piano in New York. Or, that 24 pianos delivered to a school as a "lab" will all arrive tuned alike.

Certain musicians will demand a more sensitive tuning than what would be the result if the tuning machine were set at A440 for the duration of the entire tuning procedure. This brings up a term known as "Stretch Tuning".

Stretch tuning is a procedure widely followed by the piano tuning profession. It recognizes a phenomenon of the human ear whereby tones in the upper range of a keyboard will sound "flat" even though they are calibrated with extreme precision. Fortunately for all, a consensus has long since been agreed upon as to the exact amount of stretching. A piano so tuned creates the impression of great tonal brilliance. Preliminary to a description of stretch tuning, a bit more basic information is in order.

For the purpose of standardization, the word "semitone" is used to describe the difference in pitch between any tone and the tone 1/2 step above. One one-hundredth part of a semitone is called a "cent". Thus, to raise a certain tone "one cent" is to raise it from its original A440 setting by one one-hundredth of a semitone.

All electronic tuning devices make use of this standard and have a dial by which the technician can deliberately change the basic setting of a given tone by as many 'cents" above or below a given optimum as he chooses, merely by altering the setting on the dial of his tuning device (Figure 5-3).

Armed with this standard, it now becomes possible for the technician to plot with precision the exact degree of stretch and to achieve exact synchronization of tuning between two instruments even though one may be tuned in New York and the other in California.

"Stretch Tuning", as described here, means the deliberate and precise raising or lowering in pitch of a given range of tones along the scale by one or more "cents" according to a predetermined standard.

RHODES Pianos are not stretch tuned at the factory.
Instead, they are tuned to equal temperament.

The schedule offered here is a carefully determined approximation. This schedule is the result of the collective tuning experience of a great number of qualified concert tuners.

Since this is an approximation, deviation from this in qualified hands is certainly allowable. However, with the tools just described, it is also possible to plot with equal precision the exact degree of deviation decided upon. The end result then, will be that two pianos so tuned will synchronize with such precision as to play together as one.

To ease your work in following this schedule, it is suggested that you mark with a pencil on the Tone Bar Rail the exact place where the basic setting changes and the number of "cents" change dictated by the chart (Figure 5-4, Page 5-6).

First, calibrate your tuning machine in accordance with Manufacturer's instructions, making sure that the arrow is set on Zero. Next, tune A above Middle C. Follow with A#, B, C, C# and D. Observing your Chart, you will notice that the next tone, D#, is supposed to be tuned 1 Cent sharp. So, turn the dial on the tuning machine one one-hundredth of a Semitone (1 Cent) sharp. Now continue tuning D#, E, F, F#, and G. Again, observing your Chart, notice that the next tone, G#, is supposed to be tuned 2 Cents sharp. So, again, re-set the dial on your tuning device. This time set the dial two Cents sharp. Continue this procedure until you reach the highest note on the Piano.

Now, go back to your starting point at A above Middle C. Move the dial back again to Zero. Observe G# to the left of A. The Chart shows this to be 1 Cent flat. Therefore, following the procedure, which by now is familiar to you, turn the dial to the left of Zero a distance of 1 Cent and tune G#. Continue downward, tuning G, F#, F and E.

The next note, D#, is one and one-half Cents flat. D, C4, C, B, A and G# are all two Cents flat, etc. Continue observing the schedule shown on the Chart until you reach the lowest note on the Piano.

Upon completion of this, you will have Stretch Tuned the Piano in accordance with the best tuning tradition. Now, treat yourself to a performance and enjoy the rare brilliance that only Stretch Tuning can achieve.

Should you ever wish to revert to standard, equal temperament tuning, simply set your dial to Zero and leave it there as you proceed throughout the entire Keyboard. This may be necessary where you feel the need to synchronize with an organ, for instance, where it is impossible to Stretch Tune.

It should be noted also that with all instruments where any option can be realized, the musician will automatically follow the concept of Stretch Tuning. This may explain why an instrument tuned to equal temperament may sound dull and flat. 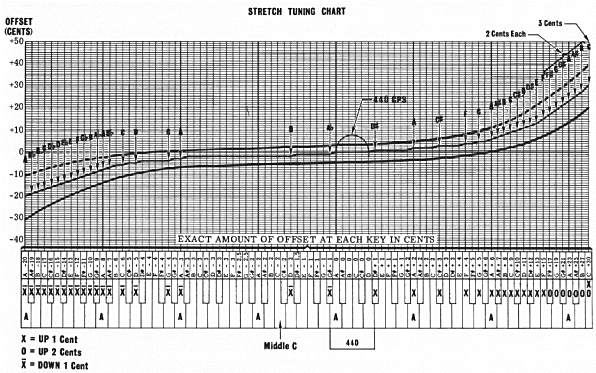