Fundamentally, there has been no deviation from the original design principle, though the actual configuration of the parts has changed.

The original Hammer Assembly appeared as shown in Figure 8-1. 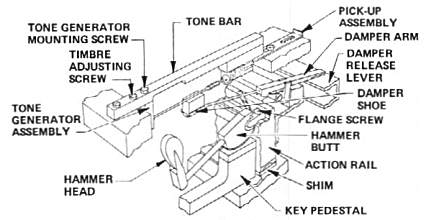 The Hammer Head was of the conventional "tear drop" design. The Hammer Shank and Hammer Butt were formed from wood and therefore tended to suffer the weaknesses of wooden parts, such as off-center holes, drifting holes, warping, etc.

An interim change involved the insertion of an aluminum clip (Figure 8-2, A) on top of the Key Pedestal. This was done to increase the acceleration of the old Hammer design.

The next generation of Hammers featured a molded Shank and a molded Flange (Figure 8-3). These parts were made of CYCOLAC, a material which has withstood the test of time and has proven to be dimensionally far superior to its predecessor, besides being practically impervious to variations in temperature and weather. At this same time the Felt Strip originally attached to the cam curve of the Hammer was instead placed on the newly designed Pedestal surface of the Key.

The "tear drop" Hammer Head was excellent for standard pianos, however, it tended to wear a groove, and as the groove deepened, the quality of sound deteriorated. Replacement was cumbersome and costly.

While this type of Head was retained for awhile, another innovation followed soon (Figure 8-4). It consisted of a wooden Head with a Felt Tip, which was easily removed for replacement. This was a major step forward in that replacement could be done inexpensively by the musician.

At the same time, research was going on with a type of Neoprene which would be a useable substitute for the felt Tips. Felt - being what it is - was still subject to grooving. The formation of a groove is costly in tone production, since the walls of the groove act as dampers. It was hoped that a material could be found which would end the problem of grooving. The Neoprene Tips proved superior in every way and were introduced into the line early in 1971, following extensive testing.